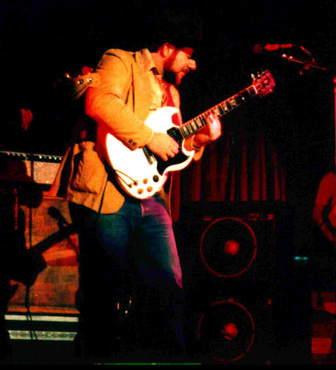 Last week, I mentioned Dru Lombar. This piece about his death was first written for the JaxBeachJournal in 2005.

I’ve been bummed for a week – not really depressed, just feeling low. I thought it must be because of New Orleans, but I really felt that the sadness was closer than that. I didn’t feel like writing for this site – I had to force myself to mount and frame photographs for several shows. I knew something, somewhere was wrong. Then last night I got an email from a friend. It said that last week, Dru Lombar died.

I met Dru in the late 70s. I had moved to Macon, Georgia fresh out of law school ready to make something of myself. Dru was a neighbor. We both owned old, Victorian houses high on the hill just above downtown – not far from the H&H Restaurant.

Dru had already made something of his life – along with Randy Howard, Joe Dan Petty, Steve Miller and Rick Burnett, Dru had formed Grinderswitch, and had been the opening act for The Allman Brothers Band, The Marshall Tucker Band, The Charlie Daniels Band, Wet Willie, Lynyrd Skynyrd, and Bonnie Bramlett – one of many folks who connected Macon and Jacksonville through music.

Grinderswitch was always kind of second-tier in Southern Rock, but folks who knew the genre always said they were the baddest of the bands. Just look at that photograph of Dru with his big smile – we were young, didn’t care how poor we were – unlike the hippies, we didn’t care about The War – all that mattered was playing the music.

A few years ago, Dru gave an interview to Hittin’ The Web, and talked about his early musical influences.

When I was 8 or 9 years old I heard Freddie King’s “Hideaway” on the car radio. It knocked me out. I was hooked. I always loved early ELVIS so the natural thing was to pick up a guitar when I was 10. It’s been downhill ever since. I would listen to WLAC out of Nashville late at night and hear Muddy Waters, B.B. King, and Albert King.

Southern radio was always a strong influence on all the musicians of the south, that’s where I first heard “Memphis” by Lonnie Mack. I went right out and bought the album (my first). As far as slide goes, I was 17 and Duane Allman was pretty much the man. Then when I moved to Macon I was heavily dosed with Elmore James. Great stuff!!!

Reminds me of one afternoon when Dru was at my house in Macon. I had just gotten a guitar and was learning to play it. I couldn’t decide whether to play it right handed or left handed. Dru told me he had a hard time the first few weeks he played – he was left-handed, but Elvis played guitar right-handed, so he was going to learn to play that way, too.

He was a member of Grinderswitch at the time. Dru was a big guy – and had a big, warm personality to match. His gravelly voice was perfect for Southern Rock and blues. And unlike so many musicians at the time, Dru kept his head on his shoulders and saw what worked in the business, and what didn’t work. His goal was to keep playing.

By the time I had moved back to Macon, Southern Rock was in decline. Musicians blamed the rise of disco. Businessmen blamed record piracy. A group of us tried for several years to kick Macon back into the music business, but with Capricorn Records in bankruptcy, with various drug trials, and with the powers that be in the city not wanting the music business, a revival was not to be. Dru gave up in 1983 and moved away. I got out of town a few years later.

By 1992, I was working in the TV business and had wound up at WJKS-TV in Jacksonville. One afternoon, I was eating lunch at The Mongolian Barbeque on Third Street in Jacksonville Beach. The fellow at the next table got up to go back to the buffet. I looked up at him and it was Dru. It was a happy reunion, and we learned we were neighbors again. He had moved back to his home of Jacksonville and was back in the music business.

Dru was running New South Productions. He was re-releasing several of the old Grinderswitch albums as CDs. He had formed and was touring with his new band, Dr. Hector and the Groove Injectors (available on Kingsnake Records.). The blues had made something of a comeback in the 90s with festivals around the country.

I ran into Dru a couple of days later at the post office. He showed me his mail – several orders, and checks, for Grinderswitch albums. He said he had no idea running a record company was so easy, then laughed. Dru remembered his roots.

No matter how busy, he set aside the first weekend in April to perform at the Springin’ the Blues festival in Jacksonville Beach. They always wowed the crowd with tunes such as “Safe In Your Arms Again.” (Written by Dru and Rick “Hurricane” Johnson – Heavy Chevy Music, BMI, Reed/Cane Music, BMI – from “Bad Connection” Dr. Hector and the Groove Injectors, Kingsnake Records).

When I left Macon I became a recording engineer/producer. Just local stuff, but it gave a new outlook on the whole record making process. Then I started New South to release old Grinderswitch Albums on CD. I have 2 titles, Live Tracks and Unfinished Business. Then I got involved with booking Blues Artists (Sonny Rhodes, Floyd Miles, Miranda Louise and others) I did that for 5 years while I was touring Dr. Hector.

Dr. Hector toured the U.S, Europe and Japan, and was very popular with the blues revival crowd.

When we went to Japan we were cooking and being there with Alex just made it a special time for Dr. H. We are trying to connect with someone to bring Grinderswitch and Bonnie over next year. I love the Japanese people. They totally get it.

With New South Productions, Dru was recording and promoting new bands – he’d even dug up a group of high school kids who played the blues. And really played. He worked hard to promote Thunder ‘n Lightening, but the band never caught on. The wrong music at the wrong time. People were listening to another Jacksonville band – Limp Bizkit.

As the millennium was turning, Dru decided to return to the road, and was working on reforming Grinderswitch with Joe Dan Petty and Randy Howard. But in January of 2000, Joe Dan died in a plane crash just outside Macon. Dru pressed on, putting together Grinderswitch with new musicians, and with Randy playing when he could. (Update – Randy died in 2015.)

I was doing time at a local Office Depot copy center at the time, and worked closely with Dru on making covers for his old Grinderswitch CDs and designing new ones for the new band. We also got together frequently with the North Florida Music Association, an industry trade group. But Dru returned to the road, so the last few years, I didn’t get to spend much time with him.

Now I learn he’s gone. There will be a memorial service and fundraiser for Dru at New Life Christian Fellowship in Jacksonville. It will be Saturday at 2PM and will be live streamed on the Internet. grinderswitch.com should have the link when everything is set up. I’ll certainly miss Dru, though I’m sure he’s safe in Your arms again.

Update – A local newspaper is maintaining a guestbook for Dru – a lot of his friends have been signing with messages showing how much he meant to them, too.