Guana River and the hog 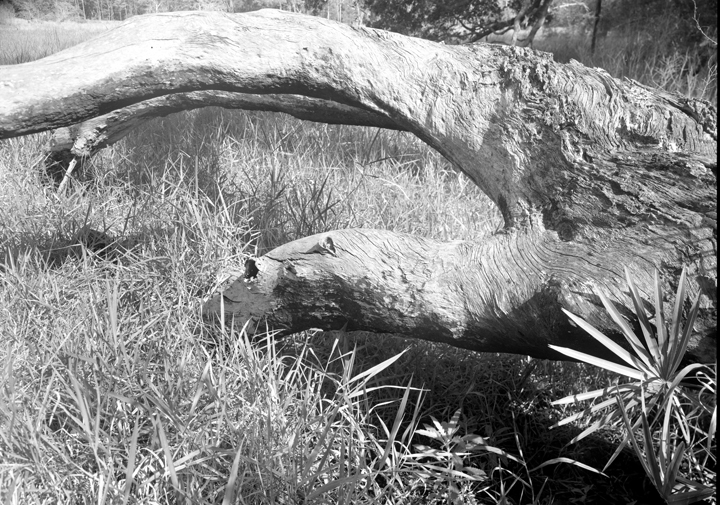 As the sun rose over the Atlantic, traffic backed up on the turn-off from Florida Highway A-1-A at what local folks call the Guana River dam. Cars pulled up to an unoccupied guard shack, and their drivers voluntarily took an envelope from a rack, tore off the admission ticket, inserted the two dollar fee into the envelope and dropped it through a slot.

About a dozen cars already sat in the small parking lot, their fisherfolk passengers spread along the banks of the river and the dam. The sounds of reels spinning, nets splashing and the occasional grunt of a fisherman pulling in a line competed with the sounds of birds and frogs celebrating the start of another day.

I had different fish to catch. I wanted to photograph a tree in a nature preserve. Out of my pickup bed, I pulled my 8×10 Calumet/Orbit C-1 view camera (called by photographers The Black Beast at 24-pounds) enclosed in a backpack filled with a second lens, an exposure meter and a half-dozen film holders (another dozen pounds) and pulled it onto my back. On my right shoulder, I carefully placed my folded dark cloth as padding, then threw over it the tripod advertised as The Best Damn Tripod In The World, the Zone VI heavy duty (another 25-pounds). Loaded, I began my hike across the dam to the freshwater marsh, interdunal swale, and maritime hammocks I planned to photograph.

The Guana Tolomato Matanzas Estuarine Research Preserve covers more than 73,000 acres south of Jacksonville in northeast Florida. The preserve is split into two parts by the City of St. Augustine, and it hosts a large variety of wildlife. A recent survey lists 44 mammal, 358 bird, 41 reptile, 21 amphibian, 303 fish and 580 plant species within the boundaries. There are habitats for 48 protected animals and 8 protected plants.

The Guana dam separates Guana River, which is brackish water, from Lake Guana, which is fresh water. The dam is 647-steps from end to end, and I trudged every one of them carrying my load. Watching my step, I could see raccoon and deer tracks in the sand. Near the far end, a fisherman climbed the bank of the dam carrying his gear.

“Yes, sir,” he said. He bent down and opened his cooler to show off his catch.

“Almost got my limit of trout. Think I’ll go over to the salt-water side and see if I can get me a red.”

I resumed my trek. Even that early in the morning the sun beat down and the humidity pulled my strength out through my pores. The temperature had been 82-degreees at 6 AM and was scheduled to rise throughout the day.

At the end of the dam, in the shade of several large live oaks, the management posted a sign-in sheet. Supposedly someone will come and look for you if you sign in, but don’t sign back out. I took my time signing, enjoying the shade.
I re-shouldered my load and started down the path, turned left at the first fork, hiked about 200-yards, paused at the first swale and looked for prospects. The right side of the shore looked promising, and after another 100-yards or so of hiking, a marvelous scene appeared.

A tree had fallen across a small piece of prairie. It was shaped like a human hand, the limb-fingers arched upwards and extended in a curve above another limb that looked like a thumb. I put down my load, studied the scene, and checked the angle of the sun. The light would fall directly on the log if I waited for a while, and would give a nice limb effect when the sun rose high enough. It’s the effect that occurs when a strong light source shines directly onto a curved object – the object appears to have a distinct black line along its edges. It would make an excellent photograph.

The late photographer Fred Picker taught to walk around a potential scene, move one’s head around, bend at the waist and find the best place, and best height, to place the tripod. I followed his advice, placed the tripod, mounted the camera, attached the lens (210mm for a moderate wide angle) and ducked under the dark cloth.

The scene looked as promising on the camera’s ground glass as it had to the naked eye. The few adjustments of camera movements took a while because the high Florida humidity combined with the condensation from my breath and sweat to fog the glass after only a few seconds viewing. I wiped it off several times, finalized the adjustments, inserted the film holder, pulled the dark slide and cocked the shutter. Everything was set to wait for the proper angle of the sun.

I sprayed the dark cloth with bug spray, then put it over my shoulders like a cape. I waited. A great blue heron slowly circled low over the pond at the center of the marsh, but spotting no fish, it flew southward. Three egrets flew to the far edge of the water and began stalking in their hunt for food. My boots sank into the soaked soil, and I hoped there was no quicksand. Squirrels scrambled through the hardwood trees and barked at one another.

After about a half-hour, the sounds of something walking through the brush frightened the other wildlife into stillness. The sound grew louder, and above a bush, I could see the hairy back of a creature. Dog, coyote, a Florida panther this far north? It was too short for a deer.

The beast stepped into a clear spot. Oh my, a wild boar, tusks gleaming, thick bristles along the spine, at least 150-pounds. What to do? Looking around, I saw that I was more or less cornered by brush and the log, but the hog was not. Decided to act while he could still run and escape.

Grabbed the dark cloth by two corners, turned the black side out, threw it up in the air while holding the corners, jumped as high as I could, and yelled, “Hey, pig!!!”

The hog must have seen some 10-foot tall monster rising out of the brush, as I hoped. The hog leaped about three-feet, then bounded across the marsh splashing water and scattering birds, squirrels and probably fish. Away from me, thank goodness.

The sun eventually rose, the limb effect appeared, and I made an exposure. I turned the film holder to make a second, and as I pulled the dark slide, a cloud drifted over the sun and the effect was gone.

The rest of the excursion was uneventful. I made another exposure or two, but nothing I thought would be as special as the log. And I was right – the print is special.

A print of this photo is available at my sales website simmonsarts.com

The camera was an Orbit C-1 made in 1982. The lens was a convertible Rodenstock that barely covers 8×10 with the 210mm elements used here, but it gives a nice, moderately wide-angle view with that format. Film was Efke PL-100, and development was in Michael A. Smith’s version of ABC Pyro. Development was with a hake brush by inspection with a dark green safelight. It was one of my earlier attempts using this method, so the negative is a little thin, but still printed easily on Grade 2 Kodak Azo. Now that Kodak has stopped making black and white printing paper, I’ll have to experiment if I print again.

And I have just found a way to make prints available through my Fine Arts website.