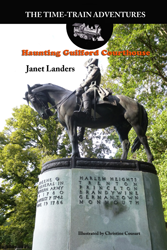 In a new Time-Train Adventure, three brave boys travel back in time and encounter mystery and great danger while taking part in a famous American Revolutionary War battle that set the United States on the road to victory and independence.

The Battle of Guilford Courthouse took place in what is now Greensboro, North Carolina. The battles of the American Revolution in the South are not well taught, but have great importance.

At Guilford Courthouse, the British were led by General Charles Cornwallis, who said “I have never seen such fighting since God made me. The Americans fought like demons.”  Those Americans were led by General Nathan Greene.  The British eventually forced Green’s forces to withdraw, and the battle is generally considered a British victory.  However, the British withdrew to Yorktown, Virginia having sustained so many casualties, they eventually surrendered to the forces of General George Washington to end the war.

The site of the battle is preserved by the National Parks Service as Guilford Courthouse National Military Park. You can visit the park easily.