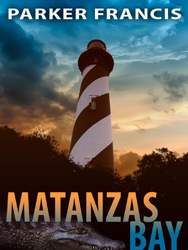 When PI Quint Mitchell volunteered to help with an archaeological survey in St. Augustine, he didn’t count on digging up a murder victim. In the nation’s oldest city, Mitchell discovers links to ancient sins, comes face to face with his own past, and unleashes powerful forces that will do anything to keep their secrets—even if it means taking his life. In this award-winning debut mystery, author Parker Francis taps into an undercurrent of violence hidden behind the sleepy façade of the historic town. When Mitchell’s friend, the City Archaeologist, is charged with a brutal murder, he must find the true killer while fighting inner demons and the corrosive residue of racial violence dating back to the Civil Rights Movement. As he learns, St. Augustine was birthed in blood—Matanzas means “place of slaughter” in Spanish—and violence is never far from the surface.

“Matanzas Bay is a Chinatown-like hall of mirrors of murder, conspiracy, and land development in St. Augustine.”
—David Poyer, author of Ghosting and The Towers

“Parker Francis’s mystery MATANZAS BAY is as intricate and full of surprises as an archeological dig into old Florida’s treasures and new Florida’s darkest secrets. Francis’s private detective Quint Mitchell has hard edges, an anguished past, and just the right amount of wise-cracking good humor to keep readers smiling. MATANZAS BAY is a page turner to the end.”
—Michael Wiley, author of A Bad Night’s Sleep and the Joe Kozmarski novels

“A compelling read that rushes you along the narrow streets and darkened alleyways of St. Augustine, Florida. The novel’s true-to-life, blood-spattered protagonist, P. I. Quint Mitchell, takes you on an exciting and suspenseful ride through the Ancient City, one you won’t soon forget.”
—William Kerr, author of the successful “Matt Berkeley” series

“Parker Francis has created in Quint Mitchell a protagonist you’ll root for from page one. Quint’s efforts to prove the innocence of a friend he believes has been falsely accused of murder will take the reader on an intriguing journey through the quaint, historic town of St. Augustine, Florida, where one wrong move can mean swimming with political sharks or becoming a midnight snack for the resident alligators. With ever-increasing suspense and enough plot twists to keep you wondering ’til the end, Matanzas Bay won’t disappoint.”
—Julie Compton, author of Tell No Lies and Rescuing Olivia

“With murder as the opponent, political aspirations take a deadly turn in Mantanzas Bay. Using St. Augustine’s history as a backdrop, Parker Francis has created a well-crafted, richly haunting tale of revenge, greed and family secrets, certain to keep you turning the pages.”
—Dianne Neral Ell, author of The Exhibit