Thanks for the Saturday afternoons, Larry 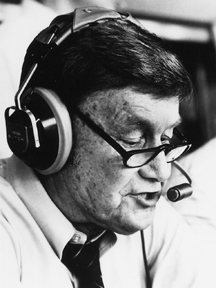 We all knew it was coming.  Last year he broadcast only home games – this year, he called Georgia’s first two games and sounded gassed by the 4th quarter in each.  Larry Munson,  the Voice of the Georgia Bulldogs, retired overnight. He will be 86 years on on Saturday.

Larry began calling the games on September 17, 1966 – it was a 20-17 road victory over Mississippi State. Vince Dooley was in his third season as coach, and Sanford Stadium held about 42,000 fans. Star Trek had debuted on NBC the week before.  Larry had spent the past 20-years at Vanderbuilt, so moving to a competitive team was an exciting new experience for him.

By November 12th of that year, Georgia was 7-1 losing only to Miami by one point in the Orange Bowl.  They went to Auburn ranked in the top ten and with a shot at their first SEC championship since Wally Butts was coach.  Auburn made the first half as dreary as the rain that day – the Dogs were behind by 13-points.

In those days when only a few games were televised, Munson painted word pictures of the game.  His detail and description were unmatched.  One of his best vocal images came on Kirby Moore’s TD pass to Hardee King which put Georgia in the lead.

Note there is no color announcer and no sideline reporter.  Larry called the entire game by himself. Georgia’s other fullback, Ronnie “Bull” Jenkins, scored an insurance touchdown.

Georgia went on to win the game and half of the SEC championship.  Alabama was also unbeaten in SEC play.  The Dogs beat SMU in the Cotton Bowl and finished 4th in the country.

Have a good retirement, Larry.  You gave us 43-years of fun.