Presidential transition smooth, unlike when Georgia fought over three governors 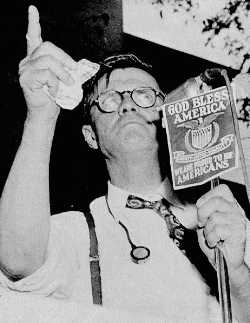 Barack Obama took office without a stumble, except for that oath of office.  Just after World War II, the State of Georgia saw a much more difficult transition.

The November 1946 election for governor saw the people of Georgia do what they’d done three times previously – elect the red suspenders wearing Gene Talmadge to the state’s highest office.

But “Ol’ Gene” was in bad health – he lived through the election but died from cirrhosis of the liver on December 21, 1946 – only weeks before inauguration day.

Now, a word about Georgia politics. Until very recently it was a one-party state. Everyone was a Democrat – but that didn’t lessen disagreements. Then, as now, the party is filled with factions. In 1947 the two largest factions were the Talmadge faction and the anti-Talmadge faction.

Before the 1946 election, Talmadge faction leaders knew about Gene’s poor health and organized a write-in campaign for Gene’s son, Herman, as insurance against Gene’s untimely death.  Their plan centered on a Georgia law which said that if an elected candidate died before inauguration, the General Assembly would elect a governor from the next two highest vote-getters.

But the Talmadge faction ran into two problems with their plan. First, Herman finished third, not second.  Supporters creatively solved the problem when then claimed to find an “uncounted” box of ballots  in Telfair County – the home county of the Talmadges. There were enough ballots to put Herman into second place behind only his late father.  Eventually,  elections officials noticed all the “uncounted ballots” were written in the same hand, were voted in alphabetical order, and that some were cast by residents of a Telfair County cemetery.

The second problem for the Talmadge forces was not so easily solved. In 1945, the people of Georgia approved a new constitution – a constitution that created, for the first time, the office of Lt. Governor. And unlike other in states, the Georgia Lt. Governor was an independent politician – not the running mate of the governor.

M.E. Thompson, an anti-Talmadge activist, won election as Georgia’s first Lt. Governor in that same 1946 election. He shocked people when he stood up to the Talmadge faction and claimed to be governor, arguing the new constitution said the Lt. Governor would succeed the governor if the governor dies.

Talmadge faction members filled the General Assembly – and quickly elected Herman governor – he was sworn in at 2AM on January 15, 1947.  Outgoing governor Ellis Arnall, an anti-Talmadge, refused to leave office – saying Herman was a pretender.

People expected trouble. The National Guard had recently returned from World War II and supported Talmadge. The State Guard, organized to take the place of the overseas National Guard, supported Arnall. Some feared these two armies would go to war on the State House grounds in downtown Atlanta.

Talmadge ordered Adjutant General  Marvin Griffin to escort Governor Arnall home to Newnan – about 40 miles from Atlanta – and to change the locks on the door of the Governor’s office.  Griffin accomplished his mission, but Arnall drove back later in the day. He was refused admission to “Governor Talmadge’s office” by security.  Incensed, Arnall commandeered the information booth at the door to the Capitol and set up his own governor’s office.  Arnall moved only after a pro-Talmadge legislator dropped firecrackers into the booth from a balcony above.

Arnall claimed the governorship for three days until he “resigned” in favor of M.E. Thompson.  The Lt. Governor proclaimed himself acting governor and set up his own governor’s office in the Lt. Governor’s suite.

Talmadge proposed that both he and Thompson resign and rerun the election. Thompson refused and filed suit.

In March 1947, the Georgia Supreme Court decided the General Assembly should have declared Ol’ Gene governor-elect even though he’d been dead for three weeks. The court made Thompson governor.

Herman Talmadge had the last say, however.  In the special election of 1948, Talmadge trounced Thompson.

And it was not the last Georgian’s heard from Ellis Arnall.  In 1966, he played an important role in the appointment of another man to the offive of governor – Lester Maddox.

Previous post: Church moved by the Hand of God