The Fabulous Bluenotes and The Three Heads

By 1968, the band added some members of a Dublin, Georgia band, The Dukes of York and morphed into The Fabulous Bluenotes as they backed up a singing group called The Three Heads.  It was Stax/Volt meets Motown as you can hear in this Stevie Wonder Medley.  Stevie Wonder Medley.   Drummer Mike Warren wrote the live album liner notes.

From the outside, Trader Louies was an unremarkable place created by the concrete-slab, block wall construction, and one-coat-of-paint school of architecture; inside, in keeping with its tropical theme, the decor featured fake palm fronds and bamboo-framed posters of Hollywood idols and pop stars.

The ambiance was topped off by little umbrellas in the drinks, table-candle lighting and the inexorable smell of stale beer. Yet, that summer, every night, from open to close, the tables were full, the bar thronged, and the dance floor was packed with people.

The reason for the club’s popularity was a remarkable musical act: The Three Heads & The Fabulous Bluenotes. For five hours each night, on a stage scarcely large enough to hold the ensemble, this ten-piece band of dedicated young musicians took the stage and blew Savannah away.  This radio spot This radio commercial promoted the band’s arrival in Savannah.

Wayne Dominy was the seminal force behind the Three Heads. Together, with childhood friends, Jimmy Beddingfield and Ed Gay, he formed a vocal trio dedicated to emulating the tight harmonies coming out of Motown. The group spent endless nights at a farmhouse in rural South Georgia, huddled around Wayne’s upright piano as they honed their vocal skills. Eventually, they began playing local gigs, and their unique sound caught the attention of a local music promoter, Carlos Hand. Impressed by their dynamic vocal range and versatility, Carlos signed on as their manager.

When it came time to put together a band capable of the musical diversity they desired, The Three Heads knew who they wanted at the core of their group. They were impressed early on with the musicianship of drummer Michael Warren who, at the age of sixteen, had accompanied them to Monument Studios in Nashville to make a demo record. They were also impressed by guitarist Van Haywood, who played with Michael in a local rock band (The Dukes of York) in Dublin, Georgia.

The Fabulous Bluenotes were the creation of organist and arranger, Sandy Bayer, of Warner Robins, Georgia.  Sandy took the band through several incarnations, and when he was approached by The Three Heads, readily agreed with their idea of fusing the groups into one super unit. Shortly after beginning the summer-long gig in Savannah, Sandy purchased the Hammond B-3 organ that was played at soul legend Otis Redding’s funeral by Booker T. Jones.

Up and down Victory Drive, and out to Tybee Island, the word quickly spread: Trader Louie’s has the hottest band in town. The bands repertoire featured the best in pop as well as soul that spanned from Muscle Shoals, to Memphis, to Motown.

In addition, each night was spiced with jazzier tunes which allowed the Fabulous Bluenotes to strut their stuff with tunes by the likes of Cliff Nobles (The Horse), Hugh Masekela (Grazing In The Grass), and Jimmy Smith (Who’s Afraid Of Virginia Wolfe).

In the Fall, college and other obligations took the band-members in different directions. The group survived for a while in a different incarnation and did a host of frat gigs across the south before dissipating. But during the summer of 1968–perhaps the hottest summer for American music ever–the Three Heads and The Fabulous Bluenotes had it all.

For authenticity, we suggest you invite some music-loving friends over, open a couple of beers and a can of salty nuts, and turn up the volume until you notice that the horns are starting to make the rafters shake. Then perhaps you can get a taste of what it was like in the summer of 68. 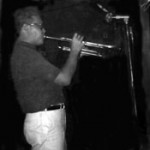 Ed gets a hug from a fan

The band and fans resting on Sunday

Where are they now?  Sadly, Randy passed away in the early ’90s, a victim of cancer.  Sandy Bayer is CEO of Warner Robins Supply Company, Ed Cody works for NBC/Universal’s TV station in Birmingham, Alabama, and Jimmy Beddingfield owns a health club in the Dublin area.  Jim Hamlin is a mental health counselor in Colorado, Van Haywood is a dentist and professor at the Medical College of Georgia.  Mike Warren is a writer of fiction and political commentary. He still plays drums in the Atlanta area, while John Simmons maintains this website.  We’ve lost track of singers Wayne Dominy and Ed Gay, so if anyone knows where they are, please get in touch.