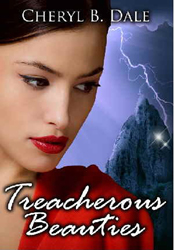 Annabelle’s brother is dead and buried, with no reason to haunt her dreams and beg her to do…what? Maybe visiting the treacherous gorge where he died will quiet his spirit. Incognito, she retraces his steps and meets the man who purportedly murdered Alan.

Jason’s earthy masculinity attracts her, and she’s convinced he’s no killer. But if she’s wrong, when Jason discovers her identity, she may end up like Alan.

Dead, with her ghost begging someone to figure out what happened.