We Were Amateur Soldiers – Martin Olsen and Vic DiGenti 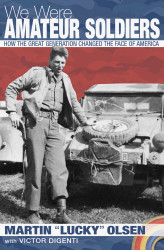 Of the 16 million Americans who served their country during World War II, fewer than 900,000 still survive. Martin Olsen is one of the survivors, and he has a story to tell. It blends the history of a generation that was born during the Great Depression, fought and won a world war, and went on to rebuild a society that launched new industries and sent men to the moon. Martin Olsen considers himself a lucky man-an amateur soldier who fought in the European theater and became part of the Great Generation. This is more than another WW II memoir. We Were Amateur Soldiers shows us a man who, through his faith, self-confidence, and force of will, emerged from the horrors of war to grow his father’s small business into a market leader. Though it’s Marty’s life, it’s also America’s story.