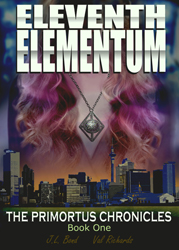 It has begun! Fourteen years after a catastrophic disaster, the world has regained its balance with the help of the Primortus. They have secretly walked amongst us since the beginning of time, protecting the earth with the power of the elements. When a fourteen-year-old girl is given two mysterious gifts from a father she never knew, she is drawn into their dangerous world of magic. She must learn to wield the power of the Eleventh Elementum to survive. With the help of Will (her best friend), his cousin and her new stepsister, she seeks out the evil that threatens New Zealand. But a black-eyed stranger is watching their every move.

Now, two powerful beings will battle one another and the outcome will determine our way of life. Filled with humor and fast paced action, the series takes the reader on an adventure of destiny, love and loss