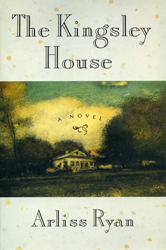 In 1843, newlyweds Nathan and Mary Kingsley envisioned a good life in their new house in the pioneer community of Livonia, Michigan–until a runaway slave on the Underground Railroad takes refuge in their cellar, and Mary must make a desperate attempt to save her wounded husband and the slave from hunters who are pursuing them.
Drawing on her own family history, Arliss Ryan has written a classic American tale: the richly imagined story of five generations–from Nathan’s son Horace, a born schemer who is all too ready to sacrifice his birthright; to Emma, who helps maintain the family through a heartbreaking diphtheria epidemic; to Nathan’s great-great-granddaughter Laura, who falls in love with a daredevil pilot. By the time the wilderness where Nathan built his home has grown into a suburb of Detroit, the Kingsley House has seen wicked deeds, a summer of lost childhood, a suicide, and a chance to fall in love a second time.
Arliss Ryan vividly brings over one hundred years of American history to life through the unforgettable story of a simple family house–and the generations whose lives passed within its walls.
Originally published in 2000 by St. Martin’s Press, this is the 2012 electronic version of the original novel.

Reviews of The Kingsley House:

Inspired by the author’s own family story, this first novel, spanning five generations of the Kingsley clan, is an ambitious historical saga. In 1843, Nathan Kingsley is proud of the new house he’s just built for his bride, Mary, in the fledgling farm community of Livonia Township, Mich.; this abode, which over the years comes to be known as Kingsley House, forms the physical heart of the narrative. A sparsely decorated but cozy farm house for the first generation, it’s adversity a grand or noble homestead. Rather, it becomes a well-worn testimony to the Kingsley family’s endurance in the face of hardship–the difficulties of farming on poor land, the 1887 winter diphtheria epidemic that takes the lives of two young Kingsley children and renders their mother insane, the family black sheep who connives twice to sell the treasured home to the highest bidder. Ryan attempts to contextualize the Kingsleys’ trials by evoking historical elements: the Underground Railroad, the urban development of nearby Detroit and the impact of WWII on American society. But these broader world events are secondary to the churning family drama. Opening with an illustrated family tree, each of the novel’s five parts introduces a new generation and centers around a critical character. This structure doesn’t help the plot cohere, however, and the novel winds up reading like five separate tales tenuously drawn together by the author’s insistent accounting of the names, ages and relations of the characters. While an uneven literary endeavor, Ryan’s first effort is a sympathetic, earnest fictionalization of a colorful family history. (Apr.) FYI: The real Kingsley house was removed from its foundations in 1977 and moved to a historic village near Detroit.
Copyright 2000 Reed Business Information, Inc.

The old Ryan home, the Kingsley House, still stands, having been moved from Livonia, Michigan, to the Greenwood Historical Village; and now Ryan shares a fictionalized version of her family’s fascinating history. It begins in 1843, when Nathan builds Kingsley House for his bride, Mary, on the 40 acres given to him by his father. The couple wants nothing more than to live quietly as farmers, but their town is a stop on the Underground Railroad, and Mary finds an escaped slave, Robert Rivers, hiding in the cellar. Nathan bravely tries to lead the slave hunters away, but he is wounded, and Mary is forced to reveal Rivers’ presence. This tragedy haunts the couple for many years until their huckster son teams up with a couple of spiritualists who contact Rivers’ spirit during a seance. Moving forward in time, Ryan relates many more dramatic adventures until concluding this wonderful tale about ordinary people who lived more than ordinary lives with the story of Nathan and Mary’s great-great-granddaughter, Laura. Patty Engelmann