Danger: You May Become A Parent – Dan Althoff 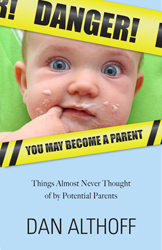 Children are hard work, major inconvenience, heavy expense, and constant worry. Why would couples voluntarily burden themselves with that? What is the compensation? What is the reward? The reward, if any, is vicarious: watching a child take his first steps, or making the football team, or earning an A in algebra, or editing the school paper, etc. Are those things worth the grinding responsibility and attrition of nerves which are parenthood? There are too many things not thought of by persons of child-bearing age. Do they have the will to be parents, not just a vague whimsy that it might be nice to have children? Do they really know themselves? Do they understand the kind of character and personality that they must have to be good parents?

This work is an innovative way of presenting facts which face parents, because it is contrary to the ways in which ordinary books minimize the harsh realities which parents must deal with. My artistic friend, Pierre, tells me that my work reminds him of a film by Buñuel. It is a camera shot without background music or artificial color; life as it actually is, not as we would like it to be. It neither exaggerates nor minimizes. It has the sweet taste of truth with the bit of bitter which comes with truth. It is liberating for the mind which disdains cliché and platitude. I think it appeals to persons who want to know themselves well. It has the warmth of honest familiarity, with the touch of sadness which every temperate soul knows.

Next post: Rank Has Its Privileges – John P. O’Brien