Dutton Island and the police 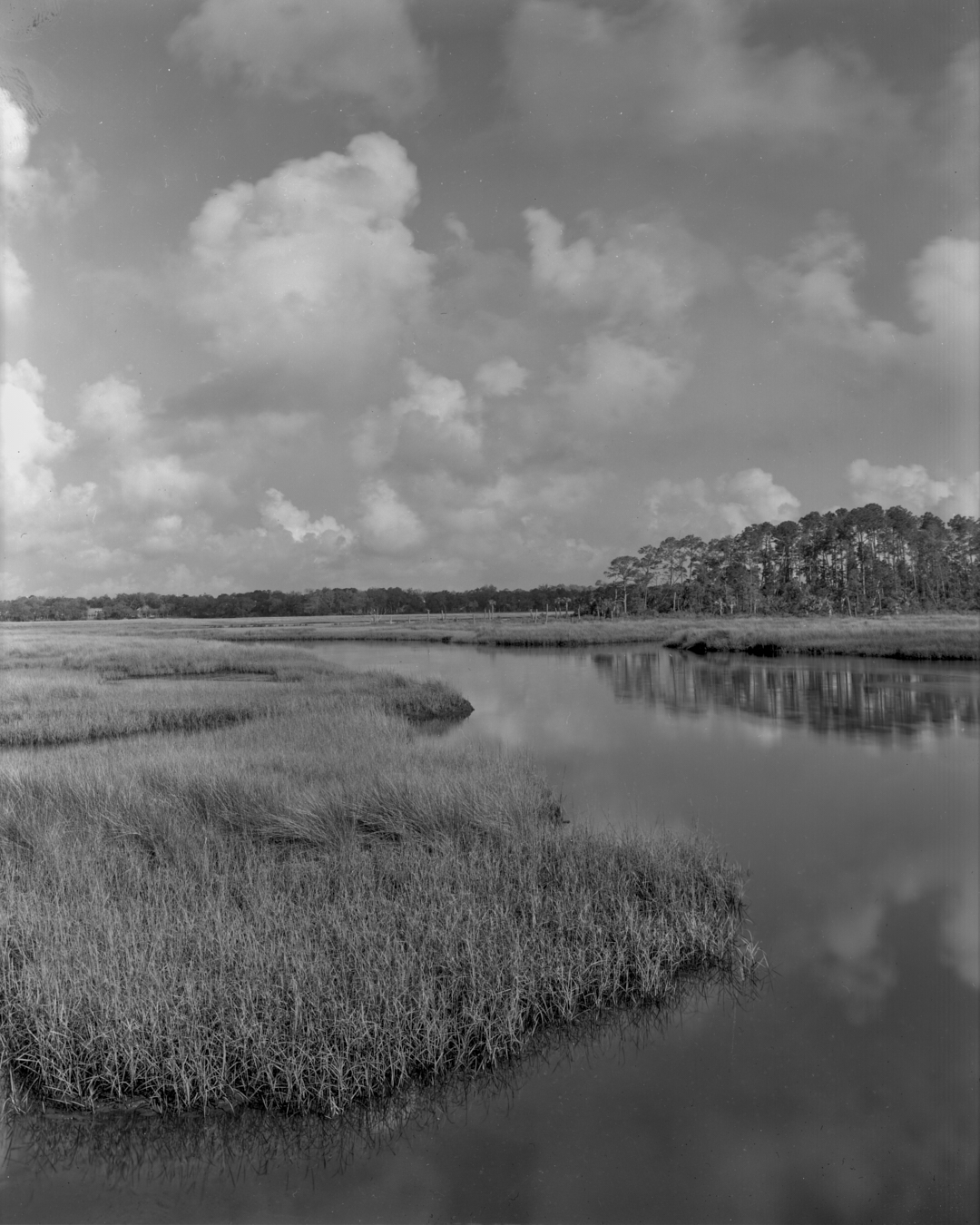 I drove through the entrance to Dutton Island Preserve down a one-lane dirt road lined with palms, palmettos and no-parking signs. I crossed a wide concrete bridge, built to safely allow fishing from the span with vehicle traffic limited to its center. The span is about six-feet above high tide. On the far side of the bridge is a small parking area.

Jacksonville, Florida got into the land preservation business many years ago, meaning there are lots of scenic views for landscape photographers. Dutton Island, in the suburb of Atlantic Beach, is one of those places.

As the bridge gives a very nice, elevated view of the marsh to the north, I trundled my 8×10 view camera, tripod, assorted lenses, film holders, dark cloth, filters, exposure meters, and notebook to the top of the span. I set up on the north side with the tripod well out of the traffic lane.

The view was wonderful. The low tide meant lots of fascinating detail along the wide, exposed banks of the creek below. Heron and other wading birds fished in water up to their knees and hunted on the land. Fiddler crabs scrambled out of their way. Marsh rabbits occasionally poked their heads out of the grasses. Osprey flew overhead. The low angle of the rising sun gave light that clearly revealed the fascinating textures and lines of the scene.

I learned photography through the late Fred Picker’s newsletters back in the 1980s. Fred taught that a photographer should find a scene, expose a negative right away, then set up another exposure and wait. I framed my scene, took my light readings, made my exposure calculations, and exposed my first negative. Then turned the film holder, cocked the shutter, pulled the dark slide and waited for something magical to happen in front of my waiting lens.

Instead, the something happened behind me. As I waited, I heard a loud voice shout, “Hey, what are you doing?” I almost jumped off of the bridge.

An Atlantic Beach police car had quietly pulled up onto the bridge, and a florid faced officer glared at me from the cruiser.

“I’m taking a picture,” I answered trying to act like what a police officer would consider normal. He obviously thought I was some kind of mad man.

The cop got out of the car, walked to its front, and assumed the intimidating position they must teach at the police academy – feet at shoulder width, hat low over the eyes, hands positioned above his pistol on one side and Taser on the other, looking like an old west sheriff about to draw his six-shooters. “A picture of what?”

“Why?” His face softened a little into puzzlement.

I thought fast. I knew I had only one chance to avoid being run out of the preserve. “The folks at the art gallery downtown say the rich folks in Ponte Vedra Beach pay good money for pictures of marshes.” Which was actually the truth.

“Damn, maybe I need to get out my camera and take some pictures, too.” He laughed and strolled over to my camera. “What is this thing?”

“It’s an 8-by-10 view camera. It shoots negatives the size of your head.” I pulled another negative holder out of my stroller and held it up to show him the size. “Want to look through it?”

He did. I reinserted the dark slide, pulled the negative holder, and put the dark cloth back over the camera. I showed him how to get under it and look through.

I explained how a lens reverses everything, and he seemed satisfied.

“Now I know what to take pictures of. Good luck with yours.” He chuckled, got back in his car and drove further into the park, frightening off any wildlife and insuring I wouldn’t get a more interesting negative than the one I’d already shot.

I packed up, walked to the truck, loaded the equipment and drove away.

Such are the adventures of a large format photographer.

The camera was an 8×10 Orbit/Calumet C-1. The lens was my Rapid Rectillinear triple convertible with the 12 ½ inch elements. Film was Kodak T-Max 100 that had expired a dozen years before.