The Cat and the abstract palm 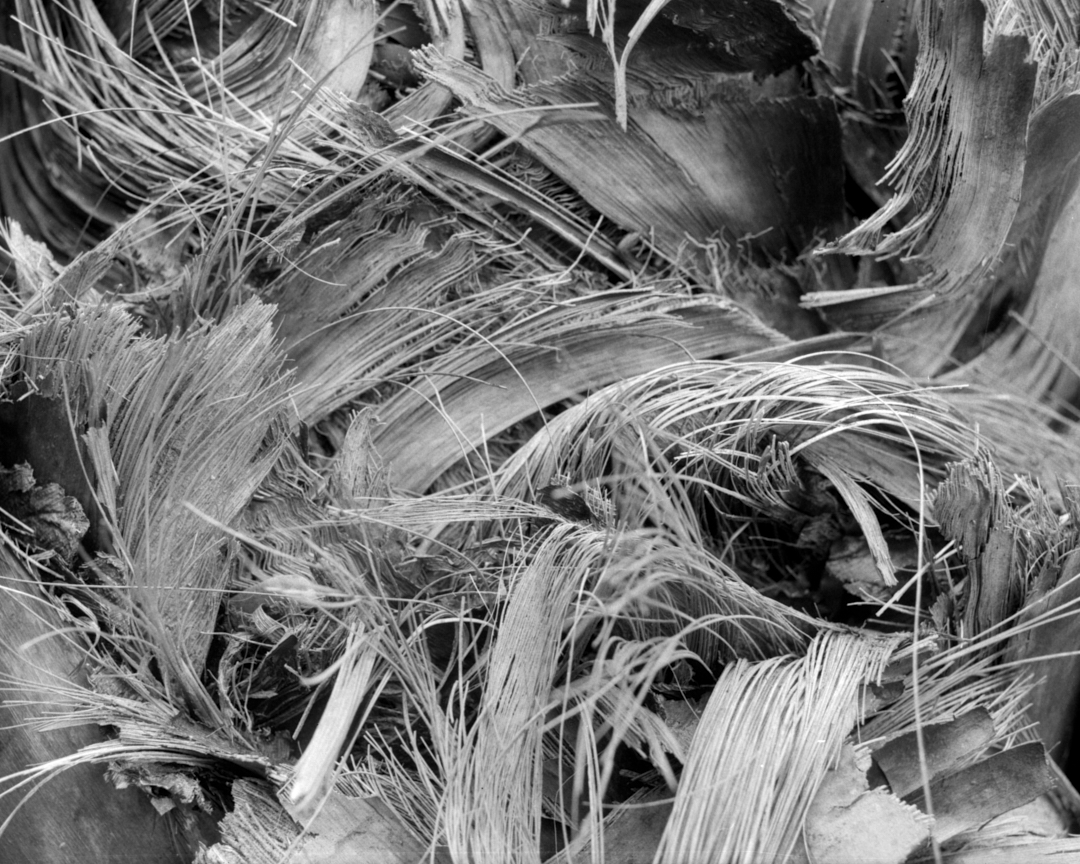 I decided to try photographing once more at The Tides Preserve in Atlantic Beach. As my last visit caused undue police attention to my 8×10 view camera, I decided to take a smaller one – a Mamiya RB67.

That camera measured only 4x4x7 inches and could be carried by hand or mounted on a tripod. It had been the favorite camera of wedding photographers from the mid-70s to the mid-90s, so I thought maybe the police wouldn’t find it so strange. I bought mine after I read that Brett Weston used one later in life when he could no longer carry his heavy 8×10.

I mounted the camera on my tripod and put it over one shoulder. Over the other, I pulled a bag holding lenses, film, and a light meter.

On my previous visit, I had walked over the hammocks to the marsh side of the preserve. This time, I walked across the parking lot to a dirt access road. The road was blocked to traffic by a swinging gate, but a smaller opening allowed foot traffic. I slipped through and walked down the road.

The Live Oaks arched over the roadway creating a tunnel that was spooky even in the daytime. They reminded me of the Disney version of The Headless Horseman. The limbs formed patterns that looked interesting to the naked eye, but they flattened out and lost their appeal when seen through the camera viewfinder. One beneficial aspect of the rise in film prices is better discernment in subject matter.

After a half-mile hike down the road, I arrived at a large pond. It was clearly man-made, with a dam on one end and landscaped, grass covered banks. A few snowy egrets waded along the far bank, searching for food. I chuckled as I watched them walk as their knee joints always appeared backwards to me.

I pulled out a long lens – 250mm – and tried framing the egrets. I wasn’t inspired. Shorter lenses framed the pond as a landscape. Again, nothing moved me. I headed back to the truck.

As I walked along the road, and had almost reached the barrier gate, I sensed something behind me. I stopped and turned. A cat. He saw me stop. He sat down in the middle of the road and stared off to the side with the kind of indifference only cats show.

I walked to the gate, turned and leaned against it. The cat had followed along. He walked until he was about a dozen feet away, then he sat down and looked me over. I looked at him.

What a cat. He had the dirty, scruffy look of a cat without a home. A hairless scar across the top of his head showed he fought for his territory, and he obviously thought of the road as his own. But his strongest feature was his jaws. He had the big, puffy cheeks of an adult tom cat. It was a look called muffle-jawed in this part of the country, a phrase that comes from Gullah and originally referred to a kind of chicken.

There’s my photo, I thought. I slowly set up the tripod and pointed the camera towards the cat. As I was focusing, he stood up and began to walk. I quickly loosened the tripod head and panned the camera with the cat. He ran behind a palm tree, and as my camera stopped, I realized I’d never looked at a palm in this way.

The cat ran into the woods, but I had a new subject. I moved the camera to about six-inches from the palm trunk. The RB67, unlike many other cameras, could focus that closely. Through the viewfinder, I saw wonderful abstract displays. The tree’s trunk, called a stem, was covered in the remnants of former leaves, looking like blunt spikes sticking out at various angles, and scars where even the remnants had fallen away. By using a somewhat wide angle lens – 90mm- and putting the camera only inches from the subject, I could control which parts of the tree were visible with selective focusing.

A dozen negatives came from that one tree, and each was fascinatingly different. I had learned a new way of seeing. A lot of photographers take macro photographs. They use a special lens to make very small subjects, such as insects, huge in the image. But this was something different, taking a normal lens and putting it only inches, rather than feet, away. The image and perspective was exactly what any of us would see with the naked eye if we stood that close to a palm.

Luckily, no police came along. I’m sure they’d find someone taking a picture of a tree trunk from six-inches away very odd.

The camera was a Mamiya RB67 Pro – the first version, made between 1970 and 1973. The lens was the original 90mm lens that would have come with the camera. Film was Efke PL-100 sheet film held in a Graflex Grafmatic.