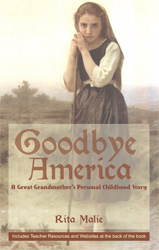 Rita Malie is a St. Augustine author who has written a fascinating story of her mother’s childhood.  Anna Baron was born in the United States, but when her father died in the 1919 flu epidemic, her mother took the four-year old child to Slovakia.  The book is the story of the child’s survival in war-torn Europe, and her eventual return to America.

It’s been a life changing year for four-year-old Anna Baron. Her father has died during the flu epidemic of 1919, and her distraught mother is taking her children back to her home in Czechoslovakia. Feeling hurt by her mother and saddened by the death of her father, at least Anna has her older sister to love and comfort her.
The family travels to Europe from Youngstown, Ohio only to experience the misery, poverty and turmoil caused by the conclusion of World War I. Soon after arriving, Anna’s mother decides to return to America, taking her beloved older sister and leaving Anna behind with relatives for five years. Within one year, Anna has lost her father, her mother, and her country. She and her sister are now torn apart and separated by two continents. With the help of her caring family, Anna must now face the world on her own.
Facing her mortality at the age of eighty-nine, Anna tells her story to her two great-granddaughters during the Thanksgiving reunion. She details her personal history, including her departure from America, her abandonment by her mother in a strange foreign country, and her eventual return to America.
Anna has been telling her story to her family for three generations to preserve their heritage, teach a lesson in history and how the human spirit has the strength to overcome unthinkable odds, and also so that her story will never be forgotten.

You can read more about Rita at her website, or buy the book in hardcover or Kindle edition from Amazon by clicking the link below.

Update: Rita went to Slovokia on a State Department sponsored tour in the summer of 2011.