The Smile That Lasted A Lifetime – Earl D. Beauchamp and Ralph Towner 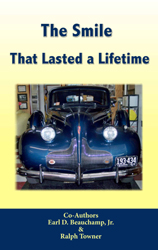 The Smile that Lasted a Lifetime is an enthralling human interest story, which explores the path which led to a man’s lifelong affair with old cars. From a very early age he fell in love with a specific car. Along with other car brands of that vintage, these cars contributed to countless vivid memories of relatives and friends during a happy childhood. This affection would last his entire life spanning over seventy years and the car was the catalyst which unleashed his interest of becoming heavily involved in the antique car hobby.

At first he was told his car was not an antique, but merely “utilitarian like a bathtub.” He became angry and was spurred to achieve great successes in the hobby while bringing respect among collectors for the car he cherished and other brands of the same era. Eventually nominated and elected to the board of the major club in the hobby, his work would lead to his becoming the National President.

His life was not, of course, one dimensional. The story deals with the normal challenges of life and death, adventures of youthfulness and passing on of adults from childhood as they became old and frail. It is a story of twentieth century life through War and peace as well as how a special piece of machinery would influence happiness while always intermingled with the normal challenges of everyday life.

If you enjoy reading stories of twentieth century life and family situations where cars kept America going through and after World War II and into fabulous fifties, then this story will be a “page-turner” for you.

Next post: Alligator In The Living Room – David Pitts